He married me out of revenge 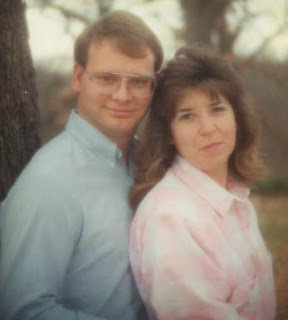 Leviticus 19:18"Don't seek revenge or carry a grudge against any of your people. "Love your neighbor as yourself. I am God.

Don't we look young in our engagement picture? This week we celebrated our 18th Anniversary of the day we joined our hearts.... Sounds romantic until you know why we really married.... he married me out of revenge.

To be honest, I can't remember when I first saw or met my husband. He was just one of the guys in our Campus Christian group ( http://www.naccm.org/ccpittst ) at the university we attended.It was great group of friends, guys and girls, from all walks of life, brought together by our belief in God and Christ. We were a close, yet very fun loving group. - We spent a lot of time not only in worship,prayer, and encouragement, but we
all loved good clean fun! We were always on the look out for each other, never knowing if our vehicles would be mysteriously decorated during the night, put up on blocks, if we would be bombed with water balloons, or just out for a coke with friends. Many of us married within the group, were in each other's weddings, celebrated new babies, jobs, etc.

He was one of the nightguards in the co-ed dorm I lived in my first year. Suffering from insomnia and wild roommate, I spent a lot of time in the study room late at night. Simple conversations about everyday life, family, studies, and Campus Christians. We soon discovered we knew some of the same people, though we were from different states. We had instant history, friendship, and fun. I'd leave Hershey kisses or a note in his mail box at the Campus house where he lived and he'd leave me the daily comics under my door when he worked.

Then it happened. Omininous notes started appearing with my comics, and my car got 'waxed'. Was he a closet stalker? No, he felt sure I had trashed his room (labels off of soup cans, confetti, etc) while he was at a football game and he told me he would "get even" ºÜº someday. Neither of us admitting anything, we continued our chats and spending time with each other in group settings. Sadly the end of the year brought his graduation. He moved to Memphis and I moved into an apartment with a Christian girl from the group. I missed him, our talks, and our friendship. We started writing and when he was in town, there was always something to do with the group and our friendship grew. I knew that he really liked me when he gave me his calling card number, but we kept the letters coming.

We had both been praying about where to go from there and talked about goals and stuff. Dave knew he had to talk to my Mom and brother before we could talk about getting married and a visit with my brother in the turnip patch resulted in consent to ask me to marry him. On Oct. 13 (yes it was a Friday) in the early evening hours beside our favorite park bench, the man of my dreams bent down to pick up something in the dirt and came up with a diamond ring. There I was in a ratty pair of sweats and hair pulled in a pony tail with my jaw opening and closing like a fish gasping for water. Seven months later I graduated from college and then married my best friend. He never really asked me out on a date until after we were engaged. We just always hung around together with our friends and family

What about the revenge?? When we got married and I opened up his pantry door to make dinner, what I saw gave me cause to laugh - he had saved those unmarked cans just for me! Revenge was sweet that day! Since then, I've had a goal to be the best wife I could, I've failed miserably so many times, and grown in our 18 years. Have I finished growing and learning? Not hardly. Will I fail again? Probably. Should I stop aspiring to be a better wife? Not really.

"If you don't have a plan, then you plan to fail."
Our minister once told us "Turn off the noise in your life so you can hear what God is trying to tell you." What is it I hunger for and how much of that is really just a bunch of noise? Is it a a clean house, time with family, money, position, health? I guess what I really want to aspire for are relationships. Relationships not only with my dear husband and children, but ultimately God. May I aspire to grow in Him so that I may be a better Mom, wife, and friend.

Psalm 97:11: Light is sown like seed for the righteous and gladness for the upright in heart.
Galatians 5:22-23 says But the fruit of the Spirit is love, joy, peace, patience, kindness, goodness, faithfulness, 23gentleness, self-control;
Musings by Aspiring Mom2three
Labels: anniversary, marriage, revenge
Email ThisBlogThis!Share to TwitterShare to FacebookShare to Pinterest

I am cracking up. You and Dave were quite the pranksters! That is so sweet how you met and built a relationship and in turn made a life and family together. Revenge can sometimes be sweet :) Happy Belated Anniversary, praying for many more blessed years for you two.
Hugs

Shawnda,
Thank you so much for all your encouragement! I'm so glad you can find humor in our humble beginnings! Just remember to keep watching and keep laughing! I'm sure this won't be the last time!