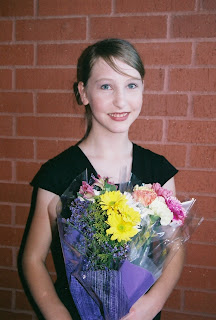 My dear daughter comes home today from church camp - again. Last week, she went to camp as a camper with her brother. Oh the stories they had to tell and the excitement at going. I'm not sure they were ready to come home just yet, but they did. I think they both grew in the short time they were gone. Claire was so filled with excitement - she seemed to glow with it. While we were standing there waiting for everyone to unload their stuff from the trailer, she already had her form out for me to sign for her to return with Connor as a CIT (Counselor in Training). At this point, Connor still likes his sister, and thinks spening time at church camp with her would be great, but remember that he is still just 9! This last week she asked if she could go back to church camp for Jr. High week to help cook in the kitchen!!! I can't wait to hear all her stories of how it went.

I am amazed by this child of ours. I'm not sure why I worried so much about her when she was growing up. The middle child, smashed between two active, rambunctous boys, a girl none-the-less - I worried that she would somehow be the "forgotten child". I probably don't tell her enough, but I'm so thankful for her. Born just 13 months after her brother and weighing in at a mere 10 pounds, she has been a delight. Caleb called her Taire when he was little and she called him Brudder.

We have educated Claire at home, starting our 7th year this fall, in which she will enter the 9th grade. For the past two years, it's just been Claire and I. We have a daily rhythm of life and i miss her when she is away. I often call her my "right hand girl" and I love having her with me -we work well together. I appreciate her: Ability to pick clothes that look good together (she's done this for me more times than I can count), organization, the way she has with little ones, that she's not afraid of most bugs or creatures, many times she's do laundry and stuff without being asked, and (*sniff*) she is becoming a beautiful, independent child of God. I can't wait to see what God has planned for her, but I can't say I want to hurry that along. I just would rather enjoy her now, for the time we have with her. I love that she wants to share with me, whether it be her music, her dance, what she has learned in school, a book that she has read, or that at times she thinks I'm cool. Our prayer for her is that she will be open to where God is leading her and that she will walk through that door with confidence as He is guiding her every step of the way.
I wonder what she'll say when she finds out that we adopted two cute little mice while she was gone! I'm sure it won't be long before she's holding them and playing with them. She's going to make a awesome mom someday!
**Now, before you start thinking this wonder child of ours is perfect, I'm adding a disclaimer that none of us are perfect, certainly not any of my children, nor my self (isn't that a shocker ºÜº). Those of you that know me are probably not laughing but nodding in agreement. I really want to aspire to work on being more positive and affirming with my family, and what better time to work on that than now!
Musings by Aspiring Mom2three
Email ThisBlogThis!Share to TwitterShare to FacebookShare to Pinterest

Mommy, I LOVE you soooo much.
CBaire

I'm gonna love reading this blog of yours. So much better than mine, I'm very random on my posts actually think I haven't posted in a few months. Well I think you are an amazing mom, and I admire and look up to you. You kids are wonderful and polite, or at least I think so. And I have to share in your missing Claire, I do too!!! We need to do lunch soon and do some catching up. Love ya!