Welcome back!  Week three of 15 Piggy Tales focuses on about the time I was six... Come on back with me as I revisit some faded memories.

I don't really remember when we left Kansas to move to Homestead Air Force Base in Florida (on the southern East tip) or how I felt. It was destroyed by Hurricane Andrew in 1992. I guess it was like a new adventure because I don't remember feeling sad or anxious.  Our new home was far different from the one we left behind.  We actually lived on a block with houses all around us.  Kids everywhere.  I can still see the house and street where we lived, streets winding around, kids playing in the streets...
We lived in military housing.  I remember thinking it was a HUGE house because we had a carport,  3 bedrooms, a small narrow kitchen, separate living room and dining, and an indoor bathroom (running water)!  WAHOO!!!  Bryan and I had separate bedrooms, but I remember sleeping in his room many times in his bunk bed. I had a yellow canopy bed with yellow bedding. We still have my bed and Only sleeps on it - sometimes she thinks it's cool. We had a coconut tree in our front yard - we had to be careful not to sit under it or a falling coconut would hit us. Mom showed us how to open one using a claw hammer - they were deliciously yummy if you ate the ripe ones!  At night time, you could sit on the curb and watch the frogs come out like a plague and it was fun to see how many were smashed in the morning. On summer evenings,we would play in the screened-in patio because of the mosquitoes were so bad.  . My Mom put these HUGE plastic self-stick flowers on the sliding glass doors off the living room so we wouldn't run into them.

Dinner time at our house was memorable because our father used to flick our elbows if we put them on the table or leaned on the table during dinner. Many times I would fall asleep because he would make us sit at the table until we completely cleaned our plates.  Mom was a great cook, but sometimes the liver or strange veggies he requested frequently made me want to throw up.

I attended 1st and 2nd grade at Air Base Elementary, where we always had Show and Tell each Friday. School was fun all of my memories there were great, kids and teachers were really nice.  I can still see our classroom with it's open windows letting in the light to palm trees swaying in the breeze.  We had a fire drill once - some kid ran back into the building, so he missed his recess.

That was the year I first remember going to church for the first time.  It was a large church that was used for several different denominations, but Mom let me taste communion wafer one Sunday morning - the wafer seemed to disappear on my tongue.  She said I couldn't have the "juice" because it was real wine.  That was the first time I remember going to VBS and making some kind of art picture with seeds.  The red-haired plump organ lady was my piano teacher and we loved her for her kindness and patients. I remember the piece I learned that year - The Happy Princess.  My mom still has that music and I can still hear it in my head.  I had to play that for a school talent show - I had to start over 10 times because I was so nervous.  Brother and I both took choir and piano lessons  there, and because Mom let us walk by ourselves, we always stopped to pet a huge brown Great Dane that was on the way. It probably could have bit our heads off, but what did we know?

Activities:  That was also the year that Mom enrolled us in Judo.  I hated Judo - having to hold my legs up in the air for warm-up exercises as I laid on the cold floor, watching my friends on stage practice their moves.  What I really wanted to take was gymnastics - my friends were in that class and they wore cute outfits... It was torture having to wear those baggy uniforms!  The only thing I remember is how to step in and flip someone onto their back on the floor.  I did that to Oldest two years ago and made a believer out of him!  I think I still have my uniform, but you can't pay me to even try to put it on!

For Fun: We had metal roller skates and used a key to adjust them. My friend's mom had a spare metal skate key in case we lost ours, which happened a lot. The girl next door was mean and I didn't like playing with her, but the kids on the left side of our block were super fun.
Mom used to take us swimming at this cool place in the middle of nowhere (close to Turkey Point) - swim hole on one side (reminds me of Gilligan's Island lagoon) and the other side had a steep embankment that was FULL of alligators!  They always had someone standing guard to make sure they didn't get into the swimming side.  Each time we traveled there, this crop duster got some kind of sick joy seeing how close he could get to the roofs of passing cars.  We heard many years later he crashed and died doing this.  Does the image of Christine come to mind? 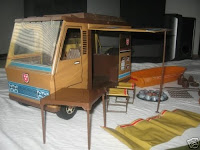 Our first Christmas there, I was sure that Santa didn't know we had moved, but somehow  I got a Barbie RV Camper and my brother got the GI Joe Big Jim camper.  All was well until Santa screwed up at the Naval office party we had to attend. He gave me a GI Joe figure and my brother got my Barbie... We were a little confused after that.

Do you have any memories when you were six?  Have you written them down or told any of them to your kids?Make sure you take time to tell them your own personal Piggy Tale!

If you would like to read other Piggy Tales, hop on over here, and if for some reason you missed any of my previous postings, you can find them here:

Great memories! I enjoyed reading your story. I had metal roller skates...lol! Those things never went very far...ha. I was also a Barbie maniac. If it was Barbie, I owned it. I look forward to your story next week!

This is great...it brought back a lot of memories to my own mind.
I am stopping by from group 2 of Piggy Tales,
Enjoyed...loved the picture of the skates, I remember those,
Janette

Great story. You have such detailed memories. How fun for your kids to read these someday. The alligators by the swimming hole was funny. I bet today it's blocked off so no one would get hurt :-) Can't wait to read more next week. This Piggy Tales has been so much fun, reading other stories and sharing my own.

My two girls are now sleeping in the same beds my sister and I had when we were little! They like having matching beds, just like my sister and I did. I never had a pair of roller skates, but I remember borrowing my cousin's metal skates. They really pinched my toes!

I don't know that I would take my kids to such a swimming hole...I think I would be a nervous wreck the whole time!

It was fun reading about dinner time too. I have this mental image of elbows being flicked and sleepy heads drooping.

Thanks for sharing! I'm looking forward to next week!

I'm so jealous of your Barbie RV. That's funny you took Judo. I bet not many women can say that. You have awesome memories. I can't believe you swam near alligators.

Thank you so much for visiting my blog--because you did I came to visit you and what should I see? My old Barbie RV!!! I loved that RV so much and played with it forever and a day--what a joy it is to see this on your blog--you made my day! Oh the memories!

Great installment. You have a good memory. I became a Christ follower when I was six. Look forward to reading more of your tales.

I'm addicted to your story! I just love all the quaint memories of skate, RV's, alligators, communion wafer etc.

Penny is actually me Janna. I accidentally used my moms account

Oh,I always wanted a canopy on my bed; it would have made me feel like a princess! I had lace-up skates and the avocado-green Barbie camper. But really, what's up with dads and making us eat fried liver? Ick. Your post brought a smile to my face & I'm looking forward to next week.