Where it all started, the start of my Piggy Tales 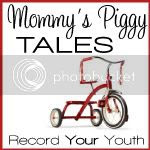 This is my first post in the "Recording My Youth" project through Mommy's Piggy Tales. While my kids have heard various stories about me, I really wanted to write some of them down for them.   Most people are surprised when they hear where I was born, my kids think it's kinda cool, and me?  Well, sit with me a moment and let me tell you about how and where I finally arrived.
While stationed in Oxnard, CA with the Navy, my parents had been trying to get pregnant for 7 1/2 yrs. and things were not looking great. Their spunky little Cocker spaniel High Brows was not fulfilling their dreams for children, so they filed their adoptions papers in hope to welcome a child into their home. When they learned they were being transferred to Okinawa,  they withdrew from those plans. Their hopes were dashed, but they moved in anticipation of meeting new people and adjusting to a new country.

When they arrived in Okinawa,  but the Papa San told them, when they arrived, that they would have a Baby San within the year. In May of 1965, my brother Bryan (was supposed to be Gabby if he had been a girl) was born after 29 hours of labor.

Because it took so long to get pregnant the first time, the doctor told my mother not to get her hopes up of getting pregnant again. One morning, as she was brushing her teeth she said she gagged (she says she always did this when pregnant) and so she went to the doctor. He said she wasn't pregnant, but she knew better. She told my father that she was expecting  by putting a diaper with diaper pin on the table. During those next long months of having a little baby to care for and being pregnant again,  she craved radishes and Flemings cough drops. She dreaded when the Momma Sans would invite her over for Green Tea because it just made her sick.  So she always left a load of laundry needing to be tended to for an excuse to escape because she didn't want to offend them. 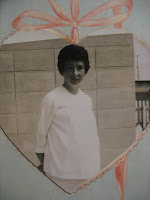 My arrival
Around 3 or so my father came home from work and Mom told him she was having pains. Since they weren't getting any better, they went to the NaHa base hospital in their 1963 Chevy Corvair. For reasons I'm not sure of, they sent her by ambulance to the Kadena Air Base on the other end of the island.


"Going down Hwy 1, it was VERY crowded on the road, the lights and sirens were on, and the ambulance had to scoot over onto the sidewalk to get past everyone, the window roller shades started flapping up. It was all very funny! When they finally got there, they rushed me in and called for my doctor, Dr. Robertson, who had delivered my brother exactly 1 yr. and 3 days previously. I told the staff that my doctor told me I wasn't pregnant, so they put a rush on getting him in there. They didn't understand how this lady could be in labor if she wasn't pregnant!  Because it was a clinic and there were many other doctors there, I had not seen him since he told me 3 month check-up after Bryan was born. 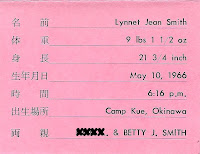 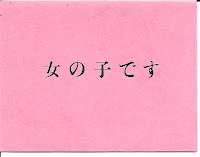 So just 3 hours after labor started I made my hasty appearance. Mom said she went to diaper me in the hospital and couldn't get my legs to go out and knew something wasn't right. Finally at 7 days old I was officially diagnosed with Congenital Dislocation of the Hip and fitted with a Frejka splint. This began a long first year for my family that included braces, frequent trips to the doctor, my hip dislocating many times and having to "pop" it back into place. She had to put 12 cloth diapers on me at a time, so it would keep my knees out and legs flattened out.  By January of '67 I was wearing the bar at naps and at night, and finally discontinued wearing the bar on May 9, 1967.   As you can see my Birth Announcement was not the norm:  It's a Girl (on the right), and the inside. 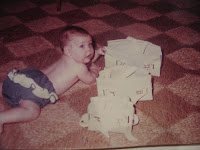 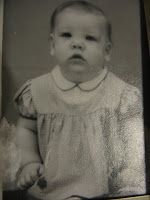 Thus began my "love" for doctors.  Mom said that for many years afterward, I would scream in terror each time I saw someone dressed in white like a doctor, including those dressed in Navy uniforms.  A real problem on Naval and military bases!

On June 28th, I was taken to the American Counselor in Na Ha, Okinawa to have my birth officially reported. So I guess that made me official!

My Name   If  I had been a boy, they picked out the name Stanley, and Andrea or Lynnet were the contenders if I were a  girl.  I'm so glad I wasn't a boy!
Lynnet: My mom says she named me after a bird (because she has always loved birds) Linnet, but they didn't like the spelling, so they changed it to Lynnet.  It is a Welch name meaning "idol", "nymph", or songbird.  Okay, I'm not seeing that in my life.  I can't sing, nor am I nymph-like, and idol??? You've got to be kidding!

Jean: I actually have my mom's middle name of Jean, though they considered Gail as well. English variation of the French Jeanne, which is a feminine form of Jean/John (Hebrew) (God is gracious).  I know that God has been very gracious in my life, and for that I'm so thankful!


So there you have it. I must say that in talking with my Mom and asking some questions, I've learned a few thing (I didn't know about the ambulance story). I've learned that I'm considered an Irish Twin:  a term used to describe two children born to the same mother within 12 months of each other or born in the same calendar year.


In the next 14 weeks (on Thursdays), I'm writing more about my life for my kids. Not all of this will be easy to write about, but I'm sure I'm not the only one to feel a little intimidated.  Check back each week to see how God brought me from Okinawa to Arkansas!

Great story! I love the idea of sharing where it all started!!

Very, very interesting! Most "military kids" I've known have enjoyed the adventures that are their lives, so I know I'll enjoy reading your story over the coming weeks. Thanks for sharing.
(wv: "jarkings": men who can?)

Our adult daughters also LOVE stories from our lives - it is the main reason I began blogging.

Thanks for sharing your beginnings. I have so much respect for young moms that deal with different physical things with their babies.

Lynette ~ have you read "Third Culture Kids." It is so insightful for anyone who grew up (like me) in a country different than your passport country.

I cried while reading your story. It was a great story and so well written. I look forward to reading more in the weeks to come!

Wow, I'm envious of all the details you have. That's a great story. Your birth announcement is awesome.

Wow! you have so many fun facts about your birth to share! What a wealth of info for you children to enjoy and cherish.

My mom was born in England and it was always so cool to have a foreigner for a mother!

I can't imagine how hard that must have been constantly caring for your hip, for everyone involved.

Thanks for sharing! I look forward to the next 14 weeks!

I'm in Piggy Tales group one, but I stopped over to read your FMBF post. Great details in your story! I'd never heard of an Irish twin before!

Wow, I love the story behind your name!! And I believe this is now the 2nd blog I have read involving Irish twins! how neat!!