I will be the first to admit that I had a privileged childhood. I'm not talking about exotic trips to foreign countries (unless you count the sand hills of KS), meeting dignitaries, and eating in the finest. I grew up in Southeast Kansas. Now before you start rolling your eyes and imagining the totally flat plains of Western KS filled with tornados, you have to get past that - to the rolling hills and woods, rich history, and the people. While growing up, my grandmother lived across the street from us, we knew everyone in town (and I mean this literally), the post-master knew us by name, we could ride out bikes in the streets, we could be gone for hours walking the hills and there was no need to worry. We had country churches, rural fire departments (just about everyone belonged to this), party-line phones, and socials that almost everyone attended. If you did something (as a child), your parents would know before you even get half-way home. Okay, granted that this was not paradise, but there are so many things that I wish my children could experience. One thing I wish they could experience is buying groceries. Okay, before you start wondering if I ever take them to Wal Mart or Price Cutter, Let me give you an idea of what I'm talking about in a realistic fiction story I wrote in 1986 when I was in college. I'm sorry it is so long, but I could not edit it down without losing part of the story.

She was an old woman and lived in a small run down house near the edge of town in which I lived. All country and small—town people have seen such old women, but no one knows much about them. Such an old woman comes into town driving an old beat up Falcon or Chevy, or afoot carrying a brown paper sack, or pedaling a three-wheeled bicycle with a full basket behind. She may own a few hens and have some eggs to sell and brings them in a basket to take to the grocer. There she trades them in, getting a pound or two of sugar and some flour.
I remember the first time I saw her. My mother had sent me to The Store to get some cereal and rolls. The building served as both grocery store and post office for our small community. Here, on sultry afternoons and chilly winter mornings, the townspeople would gather to learn of the latest news and gossip. An old ceiling fan created soundless whirlwinds, as lights swung from bare electrical wires, their cords occasionally slapping one's face. Dust gathered on the cans of vegetables, fruit, and baby food, as crickets played their fiddles in hidden corners. The huge refrigerator, with two glass doors, was filled with chunks of ham, baloney, and longhorn cheese, ready to be sliced. Boxes of vanilla, chocolate and strawberry swirl, ice-cream sandwiches, and pudding bars drew eager customers on hot summer days. The center aisle held Wonder Bread and cookies, within easy reach of small children. At the front of the store, by the cash register, encased by a glass window, were jars of candy. Tootsie-Rolls Sweet-Tarts, two-cent bubblegum, lollipops, and multi-flavored suckers tempted the children who viewed them. An old Pepsi machine stood waiting by the door, filled with Mountain Dew, Pepsi, RC Cola, and 7-UP.
I was standing on a wooden strawberry box, on my tip—toes, reaching for a box of Post-Toasties when I saw her. Between the low stocked shelves, I stared, as most children do, at the humped back before me. The blue cotton dress hung loosely about her diminutive body and her white tennis shoes were dirtied by country road walks. Her stomach resembled a bowl of pudding, shaking slightly with each step she took. Her face was tanned and wrinkled from the many years of labor. My mother had told me about Mrs. Olga Crawford countless times, and each time, in my mind, she had grown more like the witch in Hansel and Gretel. I watched her small, frail 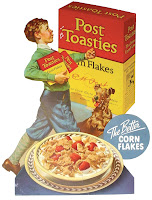 body shuffle around the end of the aisle, near the boxes of Vivid, Tide, and Bold stacked precariously against each other. She wasn't at all what I had imagined. Instead of a wicked witch, I saw an elderly woman who resembled a grandmother figure.
Once again I reached for the cereal when a hand rested on my shoulder. Startled, I whirled around, and to my horror, came face to face with Her. "Dearie, don't you need some help?" Her Swedish—accented voice crackled with age as she spoke to me. Lifting me from my perch and setting me on the wooden floor, she reached for the box, and handed it to me. As her wrinkled hand touched mine, warmth flowed. "You're Mrs. Wilson's vittle gurl, aren't you? My, how you've grown. I had a vittle gurl like you, long, long ago. She looked so very much like you, innocent and voung. Yes, she was vust like you." She caressed my long mousey hair as she spoke, sadness plaguing voice. "Promise you won't do what she did, girl. Nay, she's no longer what she used to be. She doesn't even come to see me now. won't you come and see me?" She had a gentle touch about the way she stroked my hair. Patting my head, she chuckled at my silence and round wide blue eyes staring up at her. Shuffling away from me toward the postmaster to collect her mail, her silver hair, which was tucked carelessly in a bun, danced in the summer breeze.
I watched as she descended the brick steps to her old robin-egg blue Falcon. It backfired as she started away, and an old bloodhound, disturbed, lazily stretched before resuming his nap. Running outside, I watched in amazement at the disappearing car, my jaw slack. Dirt rose in small clouds as she slowly drove away.