Self-imposed punishment of a young adventurer 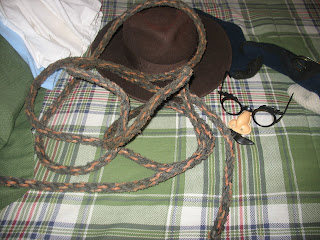 With tears in his red-rimmed eyes, he trudged into my room, like a silent martyr, placed his treasured possessions on my bed and left. I glanced over to see what he placed in the midst of the mound of ever-growing laundry (because at this age, ALL possessions are treasured).
"Connor, can you come here for a moment and explain this to me?"
Those of you that know my youngest son, Connor, know that his most prize possessions are his Indiana Jones fedora, his rope (aka the whip), and his Groucho Marx glasses/nose (I think he forgot the Bubba teeth).

Eyes still brimming with tears and sorrow etched on his face, he explained that he was putting himself on restriction because he got in an skirmish with Claire. With the most serious look on his 9 year old face he continued - "I have also grounded myself from TV, the PS2, the computer, and playing with LEGOS for a week." I listened in amazement. Where has this child been my whole life? Is this really MY child?
Moments later I had to laugh when he brought in his brown woven belt and asked "if it was a good one to receive the whipping with". Mind you, I've never used a belt to spank my kids, but a wooden spoon is my choice. To which he proceeded to try to "whip" the belt back over his shoulder in hopes of getting close to his small, but padded hiney. I have to tell you, I've never seen anything like him or this moment before. My other two children have NEVER asked for punishment nor attempted to SPANK themselves!!! I was so tempted to laugh, but how could I? This child of mine, teetered on the brink, and I could not push him over with such disrespect of his thoughts. How could I dare respond? I gathered that precious boy in my arms and gave him a hug, to which he gave me one of those butterfly kisses on my cheek. I do not understand this child, but I love him yet, still more.
Last night, as I was telling him goodnight, his small voice broke the darkness with a question - "Mom, tomorrow night at 2:42, when we have game night, will I be able to play games?"

I have been so astounded by this seemingly simple act. How many times have I messed up (okay I'm not asking you to write in with a list of these) and not taken it to my Father, but 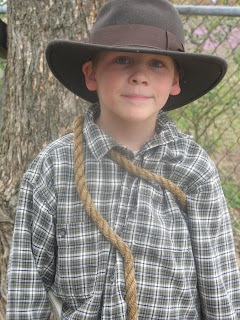 waited until He had to discipline me? Better yet, I'm so thankful that God uses my children to remind me that though it feels like I've really blown it and cringe, waiting for the punishment, I rather feel His gentle arms around me, comforting me, and extending the hand of Grace.

Now if I may borrow from Paul Harvey for the rest of the story: If you happen to drive by my house today, I'm sure you will see my dear Connor, with his rope and fedora, running through the yard or swinging from the basketball goal in some amazing adventure, living in Grace.

Matthew 18:3 (New American Standard Bible)
3and said, "Truly I say to you, unless you are converted and become like children, you will not enter the kingdom of heaven.

Romans 6:14 For sin shall not be master over you, for you are not under law but under grace.

Websters defines grace as: disposition to or an act or instance of kindness, courtesy, or clemency e: a temporary exemption
Musings by Aspiring Mom2three
Labels: grace, punishment
Email ThisBlogThis!Share to TwitterShare to FacebookShare to Pinterest

You are very talented with your ability to put your thoughts into words! I feel like I'm right there in your house. (I wish we lived closer) You are amazing & all your kids are so smart & talented! I forgot about the turnip patch story! Wow! What great memories. I'll have to check in more often.
Love,
Your Cuz from across the border