Fighting in the laundry room

Last night at 10 p.m, there was a fight, wrestling match, whatever you want to call it, it happened.  It started simply and ended with a tangling of bodies much too big to be settling it in the laundry room.  I'm sure the laundry room creatures feared for their lives. 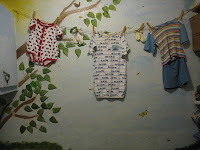 Some do-hickey part in the washer went on the fritz, so Honey got out his JB Weld, (he claims it is supposed to fix anything) and started working.  There was a lot of banging going on in there and the laundry room is MUCH cleaner than it was to start with when Honey pronounced it done, but we must wait 24 hours. So we waited with much anticipation for those sweet words to come out of his mouth... "You can use the washer."  You would have thought we were on the Amazing Race!

Well, since Honey took the boys to a friend's to work on a project and Only was out with her d-Group (discipleship group), I took advantage of the time to do some much needed laundry.  Let me tell you, if we don't do laundry for a few days, it piles up like a train wreck!  So when everyone finally got home and I said those fateful words "The washer is free!" there was a stampeed between Only and Oldest... 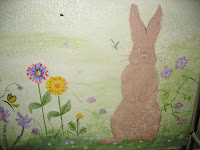 Only slid in first with a grin of triumph, but Oldest started pulling and pushing her out of the small room.  I was cornered in front of the washer and could only lay on the washer laughing.  Who would have thought teenagers would be clamoring to use the washer! Honey was no help because he was laughing just as hard and kept reminding them they had ALL Spring Break to do laundry, but nope, it wouldn't wait.. I wish I'd had a video camera.  Only was threatening to use her new-found self-defense skills and Oldest was defending with "brute" strength.  So much for the "No Doing Laundry after 10 p.m." rule!

In the end, I was blamed for making such a silly announcement, Oldest washed his WHITES in cold water just to prove he could use it first, and Only gave me "The Look" and a hug.  We tried to tell Oldest that you don't wash whites in cold (and such a tiny load as it was), but he just flipped the nob to hot and as the tub filled the final 2 inches.  "See, it's HOT," he claimed with a smirk.  I'm thinking the bunny on the wall was glad he was just a flat bunny!

In all fairness (like there was any to begin with) isn't the rule "first come, first serve"?!?! And to my defense I realized Oldest would win anyway...he always does! It was fun to...ummm..do whatever we were diong!
BTW: I'm doing laundry first this morning! Haha!!

Sherry @ Lamp Unto My Feet said...