I think there are a lot of people praying for us.  It was a fabulously beautiful day for us yesterday.  We've had much laughter at with The Princess and we even did school!
Last night was a wonderful time with the Girls.  I so much appreciate these Sisterchicks so much because when we are together there is an allowance of being real, honest, crying, sharing, laughing, venting, and accepting of the vast differences and backgrounds, experiences, and roads we've been on. I just love these ladies and the feeling of being at ease when we're all together.
Whew! There is a lot going on this week with just our family. 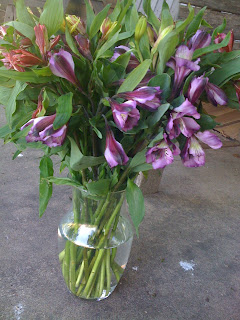 I thought your hair looked extra spectacular this morning :-)