If you don't know by now, but I've always had a love for books.  I've always had a book of some type nearby, and when I was growing up, it was not often that I didn't have one I was fully engrossed in.  In college, I gained quite a collection from the book orders and recommendations of my elementary ed. instructors, and somehow this book loving gene was passed to my children.  We have WAY too many books!

I remember once, while I was supposed to be practicing for a band competition (I was doing American Patrol for a solo).  I had memorized the piece and so I propped a book up on my music stand.  This way I could read while practicing.  Needless to say, my mom came into the room to tell me I was doing a good job and discovered what I was doing.  I lost my book until the competition was over - I got a 1 Rating anyway. So you can see, my book addiction started early and continues today. 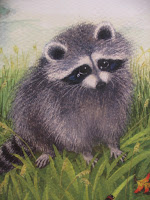 by Audrey Pen.  I discovered this little gem at a friend's house this week and was captured by it.  It's about the little raccoon, Chester, and his mom.  He's heading off to school, which she is trying to encourage him, but he is still anxious because he's going to be away from her. 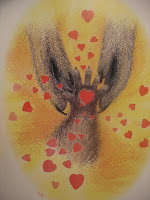 That's when she reveals a secret that makes all the difference to Chester.  I love the soft watercolor pictures and the love and kindness that this mother gives to her little one.  I'm not going to tell you the special secret, but I'll give you a hint in this picture. It's something that little Chester took from his Mom that stayed with him... and something that he learned to give back.

Penn does have a website. She seems to have a series involving Chester the raccoon, if you want to know more about this little critter.  Our family owns two of her books: A Pocket Full of Kisses

and Mystery at Blackbeard's Cove

(upper elementary) and have really enjoyed them.

2.  Having three "angels" of my own, and Princess Isabella, I was amused by Princess Pigsty

by Cornelia Funke (author of Inkheart

).  Princess Isabella (I kid you not)unlike her two sisters, was tired of having someone do everything for her - she shouted "I am tired of being a princess! It's BORING, BORING, BORING!"  and later "Princesses don't do anything fun." 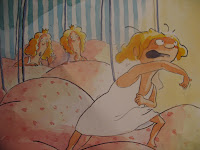 Can you imagine having a staff at hand that will:  hang up your clothes, clean your room, blow their noses, feed their pets (is this not sounding a LITTLE familiar), dress you, teach you... Isabella gave it up and threw her crown into the fishpond.  Her father was upset to say the least and called her bluff ordering her retrieve her crown.

When she refuses, he sends her to two places he believes will convince her to change her mind: The kitchen and the pigsty. She proceeds 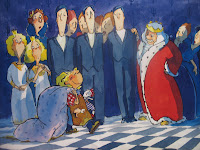 to have the time of her life doing things she only dreamed of: scrubbing dishes and ovens, peeling onions, cooking, feeding and playing with pigs, and more.  Her sister's are way too disgusted with her actions AND smell and refuse to share a room with her...  Believe it or not, there is a very good lesson in all this drama, but I'm not going to tell you about it.  I'm going to let you find this royal gem and read it for yourself!
There are four Princess books that may be equally amusing that you may enjoy as well.

If you'd like to read more reviews of mom recommended books, head on over to Adventrues of Motherhood for Feed-Me-Books Friday.

We just got Princess Pigstye at this week's library run. It is a cute story, although we did have the chance to discuss how she could have discussed her problems with her dad in a better way, rather than refusing to do as she was told ;)

I would love for you to host FMBF July 9 if you are still interested.

The Kissing Hand is great and the Princess Pigsty is new to me but one I hope to find at our library.