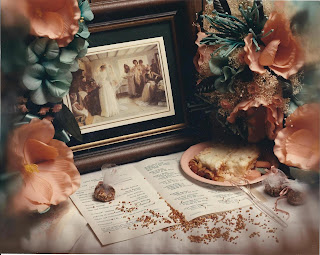 But I find myself thinking back to a love story that started some 22 years ago, and thinking of all the things that God did to bring a cute little boy from Indiana and a small town girl from Kansas together so they could officially meet in  college and eventually decide that they couldn't live without each other.

His Story: It started back when his parents decided to quit the dad's job at Ford Motor Company and move their three boys (college age, Senior, cute 5th grader) to a little town in Oklahoma to become house parents for a Cookson Hills Children's Home. That Cute Boy grew up working hard with his dad with dairy cows, rebuilding an old Ford Truck, playing basketball and football with his buddies.  When it came time for college, he went to a Jr. college in OK, and transferred to a place in KS that offered a special degree he was pursuing.  He had a close knit group of Christian friends through a local campus ministry. Cute Boy graduated from college and started a new job in Memphis, TN,  leaving behind a girl he really liked who was dating someone else.

Her Story:  Parents stationed in Okinawa had two kids, moved to Boston, then Florida, before settling in a extremely small rural KS community near the rest of the extended family.  KS Girl grew up doing stuff with family, active in band and journalism.  Traveled to Haiti and worked in the inner-city in NJ during the summer - she wanted to be a missionary in the inner-city.  She  went to Jr. college in KS before transferring to a Christian college for a year and then transferring to some place in KS where she found a close knit group of Christian friends through a local campus ministry.  Oh, yeah, there was a unit of a small children's home in her small town, whose main unit was in OK...  Imagine that!

KS Girl noticed really Cute Boy (oh yeah, they ended up in the same college, same campus group), and Cute Boy noticed Girl.  He was the night-watchmen in her dorm... so they began talking...  but  both were afraid that dating would mess up a really good friendship... so they continued being just friends. Eventually she thought he wasn't really interested and started dating someone, and Cute Boy graduated and moved far away to a foreign place - TN, leaving behind a girl that wondered if the Cute Boy thought about or remembered her.


Girl stops dating other boy and somehow Cute Boy finds out from his buddy... He took a chance and wrote her a letter. Her heart raced when she received his first letter and slowly, at first they wrote.  Sometimes he would be in town visiting his Buddies and he would stop by.  She thought he was terribly handsome and smelled really good.  He thought she was cute and he liked her.


Soon he was planning his business trips between seeing Little Girl and his parents and the long distance courting began.  Soon they were thinking of forever, but not knowing...

If you want to read more about our story (He Married me out of revenge) you might get a giggle.
Musings by Aspiring Mom2three
Labels: anniversary, childhood, marriage, Piggy Tales
Email ThisBlogThis!Share to TwitterShare to FacebookShare to Pinterest

Lynnet ~ What a lovely story and you did a great job writing it. Congratulations on a big anniverary. Loved the wedding picture. I always appreciate a sense of humor. Blessing on your next year, too! Fondly, Glenda

p.s. I love days when I get to stay in my pajamas.

Precious and congratulations...hey it only get sweeter and better...look forward to all those years ahead. We celebrated 30 and I will post on Monday what God did for us...join me on Monday and put your link on.
I am enjoying your blog and don't worry about making your post short and sweet...these stories are for your children, give them the details.
Blessings,
Janette