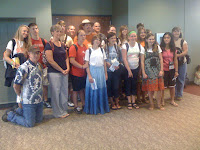 Today we put Oldest on the plane, along with 19 others for a 2-part mission trip to Belize, a Central American Country. Some of these kids have never been on a plane or out of the country, but they are going during the hottest part of the summer to work with a missionary: Sport camps, VBS, lots of time with native kids, scraping and painting a building, witnessing, and reaching out in an area where there is a church building but no congregation.

Oldest and his best friend, Steven, along with Tim (youth minister) have been planning this for months. They were in the initial work trip in the village of More Tomorrow last year that built a church for an existing congregation, as part of Steven's Eagle Scout project. It was extremely physically hard work, mixing cement on the ground, setting walls on an existing foundation, and hoisting rafters by hand. They were thrilled to complete the project and receive updates through out this last year. I know they are looking forward they will visit the village where they worked, see friends they made, and revisit the church they built.

If you think about it, please pray for them. That they kids on this trip will be able to see past the heat and the meek conditions, and focus on the real reason they are there. That God will touch each of their hearts and use this trip to plant seeds as to how He leads and shapes them in the direction He wants them to go in the great adventure of their lives.

Last night I received an email from Oldest:

Hola from Belize. It's been a long day, but we're finally settled down at the compound. Had a safe trip down here.  Tomorrow we start the sports camp and construction on something.
We're supposed to go down to the southern compound on Wednesday which isn't as luxurious as this northern one, but it sounds like a challenge. We'll see the church tomorrow. Less luxury means no wifi and no good plumbing. Can't flush toilet paper (outhouse).

The Belize Mission Trip Blog:
Belize 2010: Typical Church Trip: "We stopped today at Cheers (yes they stole their logo from the early late '80s/early '90s) to have a snack and something to wet the whistle....

When it was time to get into the bus to press on toward the Roaring Creek Compound,,,,the bus wouldn't start. We prayed. The bus didn't start. The grown men all looked at the engine,it is in the back and grunted and spit and talked like we were diesel mechanics. The bus didn't start. Uncle Steve came back with his Leatherman pocket tool, and moved us all out of the way so he could work without any hindrance. It is amazing what you can accomplish with a Leatherman pocket tool. Now the bus won't start and there is damage to the wiring, too."

What an amazing opportunity for your son.I love it when my kids come home from a mission trip - getting to hear all their stories and see all the ways God is changing them. I pray for blessing and safety for him.