Visits to Grandma and Grandpa Smith - My father's parents lived "out in the sand hills" about 30-45 minutes north of us, in between Havana and Elk City, KS.  Now, when I say 40-50 minutes north, if this were a straight road, it would take 15-20 minutes, but these were curvy, hilly, 2-lane dirt and gravel roads, one lane bridges, where tractors took up most of the road, sometimes we would have to stop because some stray cow was out.  I smile when thinking back because a lot of those roads didn't have regular stop signs.  Slowing slightly, we would glance at the cross roads as we approached the look either way towards the converging roads and see if there was dust pluming into the air. Wahlah!  A country traffic light at it's best!
Racing to the end  My parents would take off on two different roads that lead to their house - just to see who would get there first. When we first came back from FL, we had  a wonderful old navy blue station wagon that would allow dust, that billowed from the road, to roll in.   Sometimes Bryan and I would ride with Mom, radio blaring some country western song, we would be belting out the tune right along with the singer. Other times we would ride in the back of our father's Dodge truck, most of the time, overcome with dust by the time we arrived, but we loved it. Back then, we only had A.M. radio, and KGGF was our local station. Sometimes they had giveaways and we would call in to answer the trivia question.  Our prize?  A wonderful stack of country 45's that now sit in my attic.
I don't remember exactly when we got rid of the station wagon, but it was replaced by a wonderfully new '72 light olive green Chevy Malibu, complete with AM/FM radio and heating and air.  It was always a race to see who could get their window rolled up before the oncoming dust overtook us, leaving us with a fine layer of grit on the inside of the car and us. 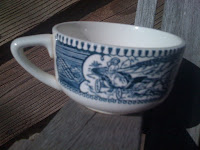 They lived on a farm in the sand hills.  A series of twist and turns, pot holes and cattle guards, before we would inch down their long lane.  We always craned our necks, hoping to be the first one to catch a glimpse of their house.  Sometimes Mom would stop and let us out at the far edge of what you might consider their yard, about 1/2 block from their house, and we would race each other and Mom to see who could get there first.  Their wood screen door, banging and creaking, alerted them to our arrival, that and the multitude of squawking chickens and barking dogs. The front porch was cluttered and there was always a cat sunning in one of the many windows.  I always dreaded if Grandma would ask me to go down to the dark damp basement, just off the porch, where they stored canned goods. I was sure there was SOMETHING down there waiting for me.
Grandma always had a 1/2 apron on, standing in their narrow kitchen, rolling out homemade egg noodles for chicken and noodles we would have for dinner. After she cut them up, she would lay them on the kitchen table to dry as she prepared the rest of the meal. It was just the right place for us to snatch a piece, if she didn't catch us. Resting on the other end of the table would be a huge ceramic bowl full of yeast dough waiting to me made into cloverleaf rolls. YUMMO! It was always fascinating to me when I would watch her fix dinner.  She made bread without a recipe and they turned out perfect every time. Huge Fluffy cloverleaf dinner rolls... I asked her to write it down once and she just said "What ever for?  I don't know what I put in it!"
Grandma always offered us a cup of hot tea in these small cups as we would sit in the living room. Bryan and I loved asking for our special drinking cups, mine was red and his was blue.
There were always piles of books and magazines (Enquirer and stuff). Grandpa had a CB radio system set up in the dining room - it was always going off.  Grandpa always wore the same outfit it seemed - grayish work shirt and pants, and a worn gray cap on his head. In his pocket he kept a tin of tobacco, which he grew in the garden, and rolled his own cigarettes. They always butchered their own meat - pigs and cattle, cured and smoked it. One time, I was there and they were branding the calves and doing something else to them.  Yum, Yum!  Those mountain oysters were sure good!
Sometimes the cousins (my two uncles and their families lived in Kansas City area) headed down to the barn to play in the towers of hay - I think we all got a whopping over the egg fight we had. They always had tons of chickens, peacocks, Siamese cats (those were mean!), and a few dogs, my favorite was the collie dog. Sometimes late at night, if you were sitting out on the step and it was really quiet, you could hear a mountain lion scream...  In the winter, we would take cardboard or our Red Ryder sled and slide down the hillside in the woods - you had to be really careful not to hit the trees.  In the summer, we camped down by the river, fishing for bass and catfish, or swimming in the pond.

Do you have any special memories spent with grandparents that you can share?

If you would like to read more Piggy Tales from other ladies, click on over to Mommy's Piggy Tales.   If you would like to join in and start recording your own Piggy Tales, contact Jana at Mommy's Piggy Tales to find out how  (jannajoy25 (at) hotmail.com). she has a third session starting up in February.  If for some reason you missed any of my previous posts, you can find them here.
Musings by Aspiring Mom2three
Labels: grandparents, Piggy Tales
Email ThisBlogThis!Share to TwitterShare to FacebookShare to Pinterest

What great fun! I love the windy, dusty roads leading to your grandparent's farm and the car with only AM on the radio. What wonderful childhood memories!!

Ooo-la-lah! I'm finally getting caught up reading your posts & I'm having a great time reading them! Especially since I know how it all ends! Ooo-la-lah!

I love your memories this week! Especially the ones of your grandparents. What special memories to have.

This is great.. I can see the dust billowing up and almost even hear some giggles.

Thank you so much for sharing these beautiful memories!

My Grandma (Evelyn) made great yeast rolls, as well. She used to give us homemade cinnamon rolls for Christmas each year. . . sweet memories.

"look either way towards the converging roads and see if there was dust pluming into the air. Wahlah! A country traffic light at it's best! "

YOu have so much imagery and descriptions that just delight my heart and senses in this post. It's just as I imagine country, childhood and dear grandmas.

It is so great to read these stories of your childhood. You really are recalling such rich memories and describing them so vividly for us to "see" and relive them with you. What a gift this is to your family. Thanks again for reconnecting. I love knowing you all over again!