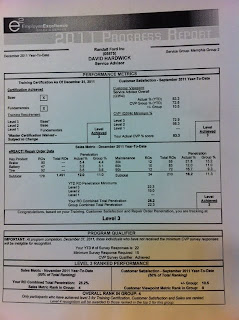 Can I take a moment and brag on my husband? This week a piece of paper (see picture) appeared on my kitchen cabinet. It's usually decorated with a funny cartoon or two, maybe something that needs to be signed, class schedules, or a picture that has been colored. But this one is different. It only appears once per year and it's all about Honey and his job.

Honey has been a service advisor for 22 yrs, at the same Ford Dealership. What is a Service Advisor? He's that really nice person you talk super nice to, at the car dealership when you have to have work done on your vehicle. He is the go between the vehicle owner and the mechanic who will work on it. I'll be the first to tell you it is a stressful job and most do not stay as a SA that long. It's hard when one is yelled and cussed at, frustrations are taken out on him, and it's a wearing job. He leaves before 5 a.m. each morning and gets home around 6, but we are thankful for his job. He has met so many wonderful and interesting people through the years and some of them, I fondly refer to as the "the other women in his life" (over 65+) depend on him like a trusted friend to take care of their auto needs.

Okay, now for the bragging! All those numbers probably don't make sense to you, he had to explain some of it to me, but the bottom line is: Honey is the #4 Ford service advisor in a FOUR state area group!!! I'm so terribly proud of him!
Musings by Aspiring Mom2three
Email ThisBlogThis!Share to TwitterShare to FacebookShare to Pinterest

that is wonderful! Congrats to your hubby!