Several months before my niece and her fiance got married, I began working on a quilt for them using Auntie's Diamonds by Jamie Mueller (Sunflower Seeds)  - a Moda Bakeshop Recipe.

When Honey and I booked a weekend retreat at our friend's hunting cabin back in March (can we say no running water, electricity, nor luxury), he was so sweet to borrow a friend's generator so I could get some sewing and relaxing done while he was off shooting his gun.Using a few fabrics from Raine's X-Rated one I did for her sweet momma, I packed up my machine and card table (jiggles like crazy) and borrowed a lamp.

I've been working on finishing up this wedding quilt, but if I don't hurry, I'll have to give it to them for their first anniversary! I had issues with my machine that I was frustrated with and no matter how many times I had it worked on, I had loops on the bottom on my quilting!  Last week, my friend QL mentioned she had the same issue and how Patrick, at Sewing Machine Center helped her solve her issues.  He walked me through adjusting a teeny tiny screw on my bobbin case, saved me a service fee and now I'm finished quilting the body of the quilt! 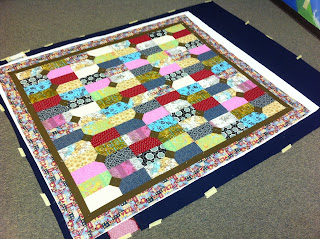 I think I'm finally excited about doing FMQ for the first time in years! I'm mulling over how to quilt the borders, but I'm thinking of quilting their favorite Bible verse or song... hmmm, maybe just some loopy loops would be simpler.

I'm fairly certain Lindsey doesn't read my blog, but her momma does, so I'm safe in posting this.  I've hidden a few little surprises in the quilting and a fun little addition on the backing that I've not done before, but hope they smile each time they look at it. A "sporting" reminder that even in their differences, they can come together and make it work.

Musings by Aspiring Mom2three
Email ThisBlogThis!Share to TwitterShare to FacebookShare to Pinterest

Your work is so beautiful.

How fun to get away and sew. The quilt is beautiful and I'm sure will be treasured. A lovely gift.