It was such a crazy day for April 21.  We had two rounds of storms, trees down all over the area, lightening stuck the fuse just outside our home.  Thankfully, we never lost power but everyone south of us did.

Youngest texted me with a picture of a puppy that was found at church between some storage buildings, between the crazy storms.  He has a bit of a soft heart for critters like the rest of our family.  Said it was going to be taken to the pound if someone didn't take it. I told him to send it home with Daddy and we would care for it until it was Adoptable age.  Poor thing still had it's eyes and ears closed.  A lady, who works with Gerber Baby foods was at the church preparing for a special Mom and Baby event they do each year at our church, rushed out and bought a bottle and some puppy formula.  Youngest had already named it Bear, cause that was written on the box he sent it home in. 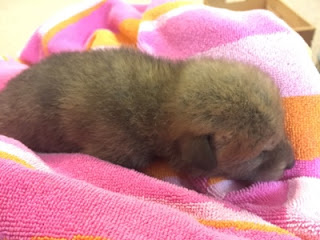 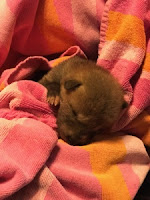 Honey said it was up to me because I would be the one taking care of it all the time, so while the kids napped, I fed the pup from a medicine dropper and kept it warm.  Can you see a "but" coming? As I was holding in, I started to notice that it didn't look like a normal puppy, at least not one I had seen before. It's nose and toes looked different, it was larger than a normal puppy, and it wasn't soft.   I called my cousin who raised Golden Retrievers, and as we talked, and I shared a few pictures of it, she said "Oh, I think it's a fox cub!"  That started a fury of research and googling (that's a word right?), and it did look like a fox pup.  I found out that foxes are legal to keep as pets, so I started to get excited a little bit, until she texted me that she didn't think it was a fox after all.

I found a lady in Austin that runs a rescue organization for wild abandoned/injured critters (raccoons, foxes, skunks, coyotes, ettc.) and after a 45 minute conversation with lots of pictures and questions, she determined it was indeed a coyote pup!!!   That started a debate what it's name should have be:  Todd, from Fox and the Hound Disney movie, or Carl, after a man from our church who's last name was Fox. What do you think?

Since they are predatory to small children, and it was a COYOTE, I knew it couldn't stay.   Oldest and I ran back into town and returned it where it was found, and decided to return after dinner to check on it.  We knew it couldn't crawl off on it's own, but it was hard to leave it there defenseless.  I know, I must have been crazy to be worried about this critter. The hard thing about returning it was I knew that at some point, someone would probably shoot it when it reached adulthood, due to coyotes in the city.  So sad!

Thankfully, when we returned, it was gone.  It's momma had returned and claimed it, which was an immense relief.  I really wasn't looking forward to trying to keep this one alive and find a place that takes in coyotes.  So there is my yarn about the day I held a coyote pup, loved it, and was in total awe and wonder about the sweet and rare opportunity we had.
Musings by Aspiring Mom2three
Labels: animals, babies, dogs, weather
Email ThisBlogThis!Share to TwitterShare to FacebookShare to Pinterest

So cute. Sorry you couldn't keep Todd Carl but ....then they grow up and are hard wired differently than domestic dogs.
Thanks for sharing your day!
Love you lots! XOXO