It all started with nine little words: "I'm having a garage sale, want to join me?"

Honestly, I've wanted to have one for so long.  I feel like I live in clutter, and it really does bother me.  Some of the clutter has come from 27 years of marriage, three kids, two parents passing away and acquiring some of their belongings, and having an in-home daycare. I was pretty giddy when Honey suggested we work on cleaning out the garage.  So we only cleaned out 1/3 of the garage, but it's a start! 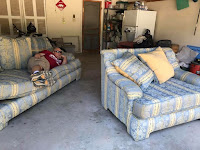 When the garage sale came up, I was so excited!  I'd not had one since the kids were little and there was so much I wanted to purge.  First was the antique china cabinet and former front storm door sold, then we wanted to get rid of our Big comfy Couch.  We attempted to list it on a local on-line garage sale, but we found that people want to low ball, no matter what something is really worth.  Something for nothing.  Grrrr...  It didn't sell at the garage sale, even though we had a live model sleeping on it.  Eventually it did sell and we were beyond excited.  We were so tired of hauling that thing back and forth. 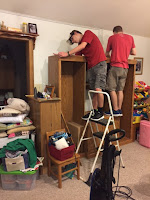 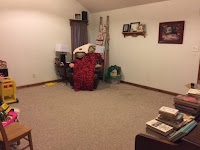 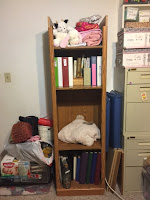 What I did love was the openness that we suddenly had in the living room.  We have been longing to replace the old massive entertainment center we purchased over 25 years ago.  I knew we wouldn't be able to re-sell it, so re-purposing was perfect. Some of it became a new storage center in the now empty bedroom after Oldest moved out of state.  It still needs to have a cap put on the top, but I'm pretty happy.  I may use another portion to make another storage bookcase if needed.
The search began for a new entertainment center and we wanted to go small.  We are working towards the empty nest and paring things down.  It's really kinda exciting!  I found a cute antique dresser for $50.  I can't figure out why someone would paint over the beautiful pulls, but after cleaning up the beautiful handles, Honey reconfigured the drawers, and drilled two holes in the back for cord access. I repainted and distressed it, before setting it up.  We're quite pleased with the final look! 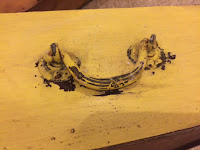 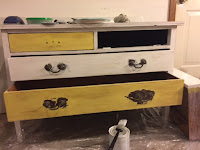 We have since purchased brand new couch and recliner, and filled up that wonderful open space we made. My mom's piano now occupies part of one wall, and a major tuning needs to happen, but I am really looking forward to playing it once again. I plan to purge the daycare toy area, getting rid of needless toys, and hang some pictures before I'll be finished, but it's a start! 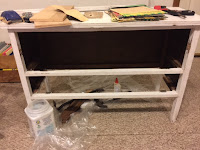 Now if I could only get the spare bedroom cleaned out!!!!  Guess we need to hold another garage sale!

Good Job! should post pictures that include your new furniture and piano. My piano needs a major tuning. Has needed one for years but it seems to not be a priority until someone sits down to play.
XOXO