It was getting out of hand and my frustration was growing.  Toys.  Because I own and run my daycare business from my home, the kids live here daily and they come to feel that it's their home as well, which I love.  The big issue is dealing with the things I need daily to use for my daycare.  Things are stashed here and there.  Mats, cribs and blankets in the spare room, puzzles and kitchen type toys in the hall bench, but the majority of items occupy a space in our living room, or Playroom as the kids refer to it as. 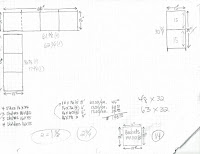 The Bin system I found at a yard sale years ago was not really working and the space was not being utilized very well, but alternatives were expensive to purchase and they were not made of real wood. I got some inspiration after seeing a cubby system that Honey's nephew had built for their home, and began researching.  After talking to Honey about it, he told me to draw out what I was thinking and he would take it from there.  He's a keeper!  He quickly drew up the plans and confirmed that is what I needed and off to Lowes for a date night we went.  Are we the only ones who spend a date at a home improvement store?  We spent one Saturday morning building the Cubbies with really nice quality pine and I'm so happy with the results. 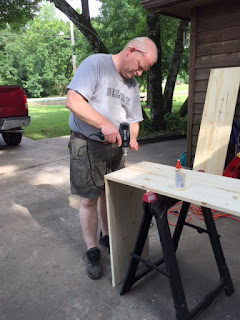 As Honey cut the boards, I began hand sanding with a block sander because Honey couldn't find his palm sander.  It was a ton of work, but we are both pleased. The boards were almost as smooth as a baby's bottom! 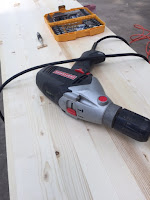 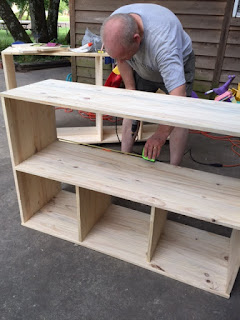 There are two sets of cubbies: Set one  has six storage spaces and Set Two as four normal spaces and two double spaces.  The double space will allow for a hidden space in the corner.

I was able to find fabric baskets at Target just the size and price I needed.  I looked at Amazon, but was wary of the thin fabric that so many seemed to be made of. After going through, sorting, getting rid of some, and putting other toys in plastic and fabric bins, I still have organizing and rearranging to do, but I'm pretty pleased with the results. I love that I have such a wonderful space now to store and organize toys, puzzles, and things I use for daycare, but I LOVE the nice flat top surface to place those bulky toys that won't fit in the baskets or plastic bins. I originally planned to paint it, but I'm not sure if I'll do that now.  Running out of time and steam for completing projects this summer. 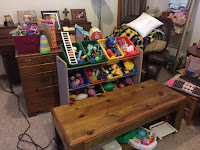 they look great!! (and no - you are most definitely not the only couple to go on dates to Lowes ~ we've done that many times. Of course, we'll run into the grocery store and leave kids in the car and call that a date, too, so, there' that... ;-)