When I sold our massive china cabinet last summer, I knew I wanted to replace it with something much smaller, but struggled to find exactly what I wanted and needed without spending hundreds of dollars.

Honey suggested an island that his work was no longer using after their remodel, and the dimensions were perfect!   It was somewhere in one of their seven storage units and they said if we could locate it, we could have it.  We were fortunate to find it in the second unit, but it was in the VERY back of the large unit.  We spent an hour moving boxes of documents and office chairs and desk and there it was... A tad bit of water damage on the top, but that was okay.

It was so heavy that we had to put it on a small furniture dolly we have, so I could move it around.  Some of the gems we discovered was a piece on the back that would extend out an additional 27" if it had the piece attached.  We thought it would fit just right into our kitchen style and the spot we needed it to go. Turns out it was worth over $1,000, but we got it for free!  I love a great bargain! 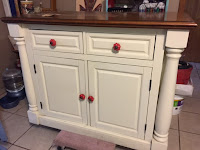 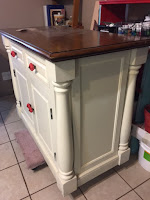 First thing was adding knobs so I could access the draws as I started on the make-over.  I started with a coat of regular teal wall paint to match our kitchen cabinets, added a little burnt umber to antique, and finished with some white to transform it to it's new version.

The top was a bit more tricky as it was glossy.  A little sandpaper to rough it up did the trick and painted it white.  Honey liked the natural wood look for the top at first, but he eventually, he concluded, the painted version was great. i added a little burnt umber to highlight and add details to the top, and now it looks like it's always been distressed. 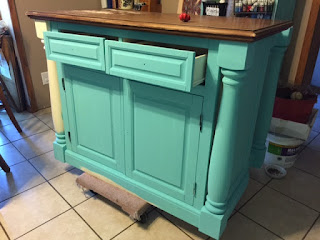 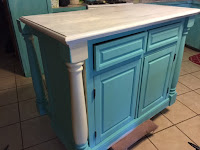 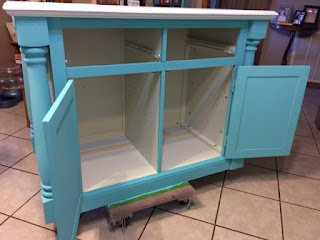 We decided it was time to move some pieces around to make everything look better and give us more space, and we were very pleased with the final look. 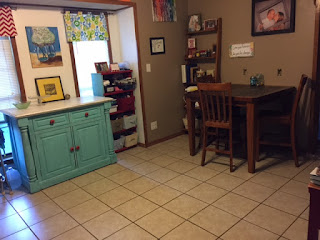