I got flowers from who??? 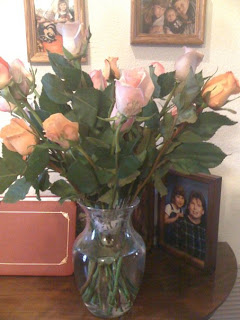 Today was a very off day for our house.  I got flowers today, via a nice UPS man, who just wanted to make sure our German Shepard didn't get a piece of him before you gave me my box.

"No, he's not supposed to do that" I said thinking of our supposed budget that got out of whack because I forgot to put stamps on two bills  - that's another whacky story...

Opening the box, 18 beautiful purple, peach, and pink roses peeked from under their protective wrap.  Pulling the card out, I was stunned...

"We love you with all of our hearts"  - Heidi, Cindy, and Sue

Who in the WORLD is Heidi, Cindy, and Sue???  Beats me!  I do know a Heidi (she was 7 when she was in my wedding), Cindy - I have a cousin named Cindy, Sue - I do have an Aunt Sue, but honestly!  The relatives wouldn't know Heidi, so I called my Aunt. She who wished she would have sent them, but thought it was hilarious!

Long Story short - I called Pro-Flowers, the lady was really nice, we got it figured out.  She read the card that I was SUPPOSED to get complete with Honey and I's pet names for each other...  Honey and I had a good laugh from it, and the nice thing is Pro-Flowers refunded a portion of the what Honey paid. I'll never get the special card he sent with the flowers, but that's okay, I got the guy!

Oh well... Gotta go and get ready for my date with Honey... Maybe we'll run into someone trying to sole the mystery of flowers from some person who has a great wife named Sheep!

What a cute story! YOur roses are so pretty!

Oh my that is so funny! Good thing Honey got some credit though, maybe you should change his pet name to Heidi, Cindy or Sue! LOL!