Learning to talk with ASL 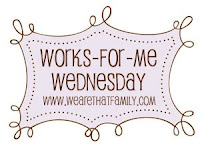 We've had so much fun with a baby in the house again.  We love the joy and the excitement she adds to each day. Since we homeschool Youngest and Only, I have this insane urge to work with The Princess as well. It's not that we want her to hurry up and grow up, but she is teaching our family/kids about caring for a little one and how quickly she has taken hold of our hearts.  I have more pictures of her on my phone than I do my kids!

As she is only 14 months old and not ready for Chemistry or a term paper on the Civil War, so we are working on ASL (American Sign Language) and she has really taken off with it.  She is so much FUN!  We started this when she was about 6 months and there was a LOT of repetition at first, but now she usually gets it after a few times.   Because she doesn't have the dexterity in her hands/fingers yet, some of the signs are difficult at first because so many are right at her face or similar in motion.  She is such a fast learner and we have found that she can now not only tell us what she wants, she is more demanding since we can understand her! 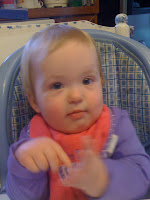 Here are some of the signs that she knows and uses almost daily: more, eat, drink, apple, pig, cat, bread, frog, book, shoes, milk, Oldest, please, no, and yes. We try to add a few signs a week when she is ready and this week we are learning chicken (nuggets), nap (sleep), fruit and diaper.  When we introduce a new sign/word to her, we say the word as we sign it, and we show her the object or a picture of the object we are signing.  This is repeated many times until she signs the word and shows she understands what she is signing. Many times she attempts to say the word she is signing.  Sometimes she signs something that we have NO idea what she is saying... She doesn't get it that we can't understand her made up signs!

Are we experimenting with someone else's child?  Not really.   When Youngest was a baby, we taught him to sign some basic signs so that we could lessen the frustration of the lack communication before they really started saying real words.  Little did we know that he had some issues that actually prevented him from talking and ASL was a total blessing.  We were given a lot of grief over teaching him to sign - people said if would quit teaching him to sign, he would start talking.  They had no idea how he struggled to form the words or even open his mouth.  It took 6 years of therapy to help with his speech apraxia and feeding issues.When he first babbled his "dadda" at age 3, he was already signing over 200 words and sentences and he actually was reading and spelling before he could talk!.

Does Youngest remember the signs now that he's 11 yrs.?  I'm happy to report, he has no lack of vocabulary and is constantly talking!  It is, in fact, easier to talk than it is to sign.  - Think of when you are driving or cooking.  When we are speaking, we just say it and keep on cooking, playing ball, or teaching, but signing, you must stop what you are doing and use your hands.   The book that I use for both Youngest and The Princess is The Perigee Visual Dictionary of Signing. A few other sites are:  ASL Browser, and Lesson Tutor.com.  There is a lot of research about why one might teach a hearing child ASL, and if you want to read about that head over to Baby Sign Language 101.

A final note on The Princess:  Her mom and dad took their family to a nearby nature center this last weekend, and they said the animal caretaker was really impressed with her vocabulary skills because she went around to all the tanks and pointed out the turtles while signing "turtle".

If I had babies again (not likely, as I'm 54 and my youngest is 19), I would certainly teach them sign language. It's a very wise idea! Do you know that ASL is the fourth most common language in the United States? (Well, it used to be, but it's way up there!)
The baby signing is too cute!

I loved using ASL with my son, he is 6 and still remembers his signs! He was a late talker so it was great to have a way to communicate. My daughter on the other hand started talking on a more normal schedule and had absolutely no interest in sign language. I got some flack for teaching it to my son - because it would delay him - but I don't buy that for a second. It worked really well!