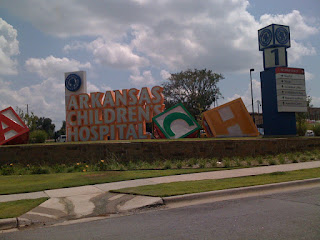 Yesterday was a long day.  Our visit at ARCH took much longer than anticipated, as we were there from 10:15-2:30.  Our stomachs were really growling when we finally left!

ARCH is a internationally known hospital of excellence. Their caring staff extends not only to the doctors and nurses, but way down to the office staff and cafeteria workers, they can all become like family once you've been there for a while. When we were there initially, we met people from literally all over the world, and found a common thread - a love for our kids. There are people there that pray for your kids, love them when you can't be with them, a group of ladies that make knitted hat (noggins) and blankets for the kids,

We were blessed yesterday by meeting with a wonderful lady in financial aid who went through some options we might have and assisted in filling out paperwork.  Because of his heart surgery almost 12 years ago, Youngest has not able to get health insurance, which, for the most part, has not been too bad except for well check-ups.  God has provided this child with very good health and little cause for doctor visits, but even so, his bill usually runs a good $3000, which they let us pay over a period of 2 years - just in time to return for another check-up! 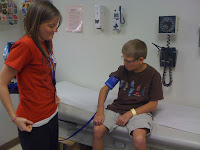 I was thankful to learn that he is gaining back the 8 lbs that he lost while on Vyvance (for ADHD).


While getting his EKG, the technician noticed the shaped colorful bands on his wrist and immediately took hers off and they struck up a fast deal on trading a car for 1/2 of her pink/blue heart (he chose the blue half of the heart as I knew he would). He thought it was so cool that she wanted to trade with him. 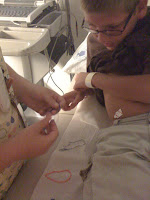 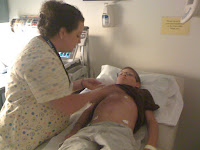 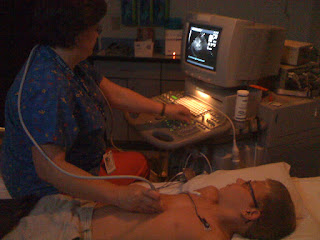 It took a bit longer of a wait for the echocardiogram.  Only and J, who made the trip with me to help me drive, had been hanging out downstairs in the coffee shop area, but people watching at ARCH isn't near as fun as it is in the airport.  I was thrilled when the technician invited the girls to join us and watch and they were fascinated with the process.  She took time to show us different parts of his heart, explain about the blood flow, and functions.  She also explained that as kids get older certain part of the heart are more difficult to see, even for an echo, so she brought in a cardiologist and they worked to view a vital part of his heart they needed to see for his check-up. 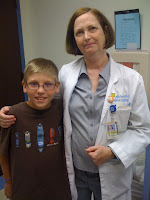 Finally we were able to visit with Dr. Frazier, his Cardiologist, who was extremely pleased with the results from test done and said his heart looked and sounded fantastic! His heart continued to function normally, showing no stress  or narrowing during periods of growth (which is something that could happen with his particular defect). He still has the heart murmur he got from a life-saving procedure done the night of his birth, but it is near as normal as it can be. He's free to do normal activities that a kid his age would do!  What an answer to prayer!

We couldn't leave without our annual visit to CVICU on the 4th floor, which is where we spent all our time following his birth and surgery.  Each year, after his checkup, I take him up to the floor in hopes to see a few of the nurses that cared for him while he was there.  The last  visit we were so blessed to find Sue and "formally" introduce Connor to her 10 years later. The nurses up there are thrilled to see a former patient that is doing so well - it is an encouragement to them. 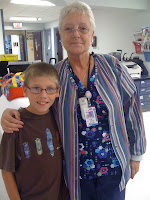 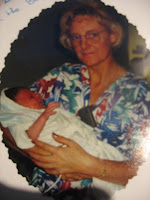 Sue has a special story about how she came to ARCH.  Over 20 some years ago, she was a mom and nurse living in England, but her daughter was born with a heart defect.  The only two place in the world she could have an operation to correct it was there in London or some little town in the middle of the US, at a place called ARCH.  Knowing it's reputation, even back then, she traveled here, and has not looked back.  She has earned the nickname of "The Boss".

We were so hungry when we got out that I told the kids to be looking for a place to eat while I navigated the heavy traffic.  While sitting at a traffic light we all noticed a sign "Tattoo and Arts Festival..." We joked about taking in the local culture, but I was afraid it would scar all of them, myself included, so we settled on Macaroni Grill and TCBY for dessert.  Yummo!

Thank you so much for all your prayers and calls.  We've been doubly blessed this week!

Your mom-heart must be full of so much joy tonight, Lynnet. I rejoice with you at this fantastic news. And Macaroni Grill was my favorite restaurant when we lived in MN. Great treat after a long hard day.

Your son is just a cutie.