Last night, as I was reading, the topic of Scolding came up.   Do you remember any scoldings you've received?  I remember one I got from an elderly lady at church for using the padded cushy chairs instead of the metal folding chairs... Made me feel angry toward her for a week.  Why?
What does it mean? Scolding means to reprimand or criticize harshly or angrily.   The Free Dictionary defines it as: Remonstrate with or rebuke (someone) angrily.  These seem to be saying that it is disrespectful, annoying, and is considered a put-down.
I must confess that I'm way too guilty of this - especially with my kids, mostly when they were younger. I'm not too sure how many young moms have not lit into their kids, mostly in frustration, and scolded them. I'm sure I've scolded a few kids that aren't mine when I've caught them doing something they shouldn't. ugh! 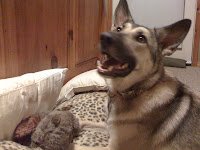 Who have I scolded?  My kids, strangers (least you think I'm totally out of control, I scold other driver and have called them an "idiot" in front of my kids ), tech support people, the dog when she gets in the trash or eats kitty poo, my husband...   Do I really believe this is going to help anything?  I can tell you, our poor German Shepard knows when she's done something wrong while we're gone.  We can tell by the way she tucks her tail and scoots off to her doggy bed.  I know that scolding just makes the one receiving it, a tad bit angry and resentful.  Why would I want to cause someone to feel this way?  I don't!

But does scolding anyone really do any good? Have you ever been scolded into good behavior? Has a good scolding softened your heart toward God and the other person? No, I'll bet not.   I think that some Christians have switched the 12 disciples for the 7 dwarfs, and take numbers to be the designated "grumpy." Some think that it is a necessary organizational behavior to grump on board (ever heard someone say that they are just being the "devil's advocate?") and scold others for their stupid mistakes and inept behavior. Scorn too often becomes the seasoning and flavor of conversations among Christians...    Donn Johnson, Santa Barbara pastor, on his post "Scolding for Jesus?"

God, I really need to stop being a fault finding person!  Please help me!  Do I really want my boys to grow and marry someone like me?  I've not been the best model and need to revamp my personality and words.

"An excellent/worthy wife is the crown of her husband,
But she who shames him is like rottenness/cancer in his bones."
Proverbs 12:4 (New American Standard Bible)

Proverbs 12:15  states:  "Fools think their own way is right, but the wise listen to others."

Yikes!   Just thinking back, I can be a pretty harsh person with my words, so right now, I'm looking for a rock to crawl under.
THINK:  Is what I'm about to say or do going to come across as respectful or disrespectful?

Proverbs 13:3 Those who control their tongue will have a long life, opening your mouth can ruin everything.

This was such a great post! thanks for the reminder and you know what, I hate being scolded too, so why should I scold???? Such good points!

Good Stuff! I really need to get this book. I'm guilty, guilty, guilty. I have been trying to do better, but I don't want the pattern to continue with my children. Thanks for sharing this in your blog!

Raine, I borrowed mine from a friend. It is a bit repetitive in parts, but still I've gleaned some valuable lessons. Am looking forward to reading more. I've still not had to the nerve to ask Honey in what ways I've been disrespectful towards him. I'm afraid of what he will say!

Good for you, Lynnet ~ sounds like a goal that honors God and honors yourself as a mom. Sounds like a change you and your family will enjoy.