It's almost 10:30 a.m. and I sit in silence, with the hum of the air conditioner and the clacking on my keyboard.  My thoughts are running laps in my head with joy, sadness, anticipation, and thankfulness. 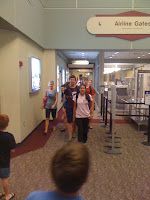 Late last night, 12 hours ago, we stood at the airport with a bevy of parents, siblings, and friends waiting for a the Team from Belize to walk through the gate. Then, there was a movement of parents, turning to the gate, peering into the distance for that first glimpse, a whisper of excitement building....


For now, my house is silent, but if you were to tiptoe to their doors, you would hear the quiet breathing... safe at home, exhausted, and filled with new experiences...  They are travel weary and filled with stories of this adventure, sights, and lessons.

Only's eyes filled with tears last night as she told me how heart broken she was to leave those kids - the poverty she saw, the sadness at the conditions, but she was filled with hope and a vision of reaching out to others and I pray the kids that went will be filled with those haunting pictures in their heads - that they won't forget the tugging at their hearts that God has placed.

Oldest's eyes lit up with excitement as he told of the manatees, sting rays, and nurse sharks (which he touched) while snorkeling off the barrier reef, walking through the Mayan ruins, playing soccer with native kids, and eating conch and fish eyes. He's our quiet one, so we'll hear more from him over the next few months.  He's been in Belize for just 2 weeks his experiences have included two groups.  He looks different, taller, more grown-up.


Not every experience was fantastic.  Several of the adults and kids got sick while there, their legs are covered in huge bug bites and some have had to go on steroids and antibiotics because of their reaction to the bites, and then there is the mysterious rash that many suffered by both teams.  It is now suspected that the laundry soap the native lady used was very harsh or their clothes were not quite rinsed properly, needless to say, they couldn't say no when she offered because they didn't want to offend her.  It was hard for them to see such conditions that people live in.  Quite a different trip from one almost 6 years ago that they took as Ambassadors to Australia, but one that God will use to shape their lives and who they are.

What experiences have you had that have shaped your life?  How have they changed you?  I'd love to hear about it!