With gun in hand,
hiding in the shadows of the doorway,
he waits for an opportune time
"If you shoot me, I'm going to really hurt you!"
I hear Only threaten from the kitchen. 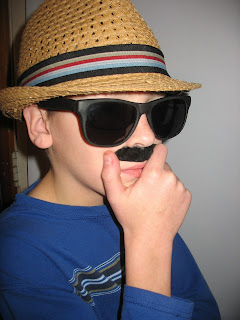 Laughter erupts as I hear a towel popping and then a snap as the rubberband gun "misfires"
*sigh*
Standing in my doorway he waves the gun and proceeds to explain how to load and fire it. All the while, I'm attempting to think and work on a project.  Soon his thoughts bombard and invade my ears, brain, and blow up anything sound going on in there.
Did you know that if you....
and then when I get......
but actually you can ....
Did you see the rubber band hit...
What do you see me as when ....
Do you think I would make a good...
His words come faster than bullets
Finally I close my eyes and hold up my hand.
"Please" I whimper
*I can only process a few things at a time*
"Mom, I wish I had someone my own age,
like a brother or sister to play with" he confesses.
(Believe me, we've made that wish more times than we can count!)
"Sweetie, after we had you, we found out we couldn't have any more kids.
You were the last kid that God gave us.
We didn't have a choice in it."
(LIGHTBULB! as Gru would say)
"Oh, so I guess I should feel pretty good about that,"
a slight toothy grin appears on his freckled face.
"Yeah, the only way you could have had a sibling your age would be if you'd been a twin"
(At one point we actually thought there would be twins
when I was first preg. with him)
I'm not sure that we could survive two of him.
Pondering on those thoughts, he quietly shuts my door
I'm left to think about the highly active, imaginative, and loving boy
that God gave us
and how he just wants a little of my time.

ps. I stopped working on my project to play Legos with him, but there was so many "treasures" on the floor that we ended up cleaning his room instead.  We had good intentions!  We did throw out a trash bag full of stuff, which is really good for him.  He hates to part with ""treasures"
Musings by Aspiring Mom2three
Labels: Youngest
Email ThisBlogThis!Share to TwitterShare to FacebookShare to Pinterest

I agree with Glenda. Sweetly said! Oh the days of cleaning the floors in Chase's room! Needs to be done again.