A little thing called a diploma 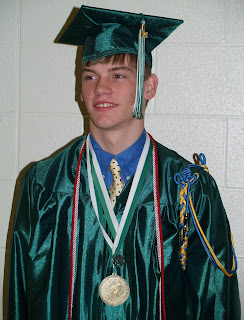 Has it really been almost a month since I last posted?
I'll try to spare you of the thousands of words  that have been stockpiling in my little brain.
Maybe it's all the words bumping into each other that has caused all my headaches lately!
Well, I had another birthday - 45 is the official count,  but I'm telling everyone I'm 39.
(I'll blame my forgetfulness on my kids).
That means I've been a mom for 18 years and Oldest Graduated on May 20th with Honors from high school. So it rained and all those people who planned on attending
couldn't because it was held inside. We were only given 5 tickets per student, but
everyone else was able to watch it live via the internet from the comfort of their homes.
I didn't cry, but bit my lip quite a bit. 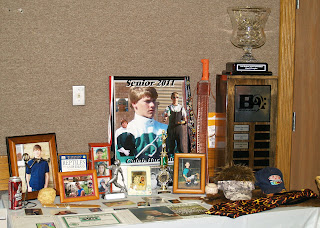 Each student (at church) graduating this year was encouraged to put together a small display that represents their life - We had Oldest handle this and we had to laugh when we saw it. I loved the "Who I am" paper he wrote in 2nd grade: Ambulance Driver, police man, and his best friend was a girl. I'm starting to see he gets his goofy side from both Honey and myself.
See that HUGE trophy on the right?  The band won close to 30 awards in a short 3 weeks, and since we go to church with FOUR rival band directors, Oldest wanted to include it.  Their band is most unique because their band has not had a drum major in 4 years - the only band in Arkansas to do this!!!

We held a reception/celebration at church.  When I asked Oldest what he wanted (I was thinking fingers foods). Honey and Oldest looked at each other like they'd won the lottery!  PIZZA.  REALLY???  Fixing homemade pizzas for 60+ people was NOT what I had in mind! Gee, who do they think I am?  If it were not for my sister chicks and Honey that gave up their Saturday morning to help me roll out all that dough, assemble, and put it all together, I would have lost it. If I every have to make that many pizzas again, I would want the same group of girlfriends because stepped in, did what  needed to be done without complaint (at least verbally).  They deserve a HUGE thank you! Our 26 large pizzas meal:


Now if we can just get him to write all those thank-you's for the sweet cards and gifts he received.  The most unique, from Eva, was a fire-proof safe!  It was the best idea I've seen  (beside the thoughtful photo album that Honey's parents put together)! We were all impressed by QL who fashioned a twenty and two ones to represent 2011!!! I also stole borrowed her table decorating and ice cream bar ideas from her. She always has the best ideas.

Only has already decided she is not going to torture me or the family next year and has decided to have a joint reception with her friend "J" (whom Oldest is dating).  They're already planning, but I can wait.

Thank you for sticking with me and checking in with me this last month.  So much more has happened, but I will share that later.  Leave me a note and let me know what has been going on with you please.I'm slowly getting back to blog land.

Congratulations on the handsome graduate. Wow.