You've looked at your phone You know the moment... It has happened to most of us in the grocery store, a business, vehicle, waiting on hold on the phone, and a song comes on that you knew from childhood or younger years.  You may not have heard it for a very long time, but suddenly you are singing along, and not just in your head. Those lyrics are coming from your mouth.  Music has a way of getting into our hearts and brains and there is a reason for that, but more on that in a little bit. If I could, I would tell Mr. Alan Jackson how greatly his rendition of those older hymns have meant to my mom.  In the advanced stage of her fight, when the

It is a bit amazing, that in the midst of this alzhiemer's, my mom knew the words to many songs she sang growing up and even into her 30's, until just a few months ago.  When Mom entered the nursing home,  many of the CNA's on her hall put Elvis Presley music on a playlist on their phones because it was something that mom reacted positively to.  Her mood would become playful, she smiled, attempted to dance, and was happy.   Hmmm, there had to be something to this!!!  I began searching for music that would help calm her down when she became upset.  At first it was the classic oldies country from the 70's that had her tapping her toes and singing along - Patsy Cline, George Jones, Barbara Mandrell, Glen Campbell, Loretta Lynn, Charlie Rich, and more. Those were great, but we needed something for bedtime or when she was very agitated. 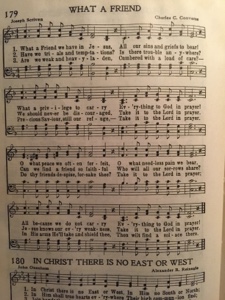 Last year, one Sunday evening, during a special old-fashioned sing-a-long at church, I saw Momma relax, sing lyrics she shouldn't remember, and there was this peace.  I knew what I needed to do, find hymns that sounded just like that little country church in Niotaze that we grew up attending.  It took a few weeks of searching and listening, and one afternoon, I found an artist that sang as if he were in that church.  Just listening to him sing, I could close my eyes, feel those hard pews beneath me, those wooden floors creaking, pages shuffling, voices lifting as the pianist played from that old hymn book ...  How Great Thou Art,  Softly and Tenderly, Standing on the Promises, I Love to Tell The Story...
In the advanced stage of her fight, when the

If I could, I would tell Mr. Alan Jackson how greatly his crooning of those older hymns have meant to my mom.
So why does it work like this?  If you are curious, music is stored in a part of the brain that is not immediately harmed by the progression of Alzheimer's.  Read on for the more technical layperson's explanation.

"Favorite music or songs associated with important personal events can trigger memory of lyrics and the experience connected to the music. Beloved music often calms chaotic brain activity and enables the listener to focus on the present moment and regain a connection to others.  Persons with dementia, Parkinson’s and other diseases that damage brain chemistry also reconnect to the world and gain improved quality of life from listening to personal music favorites."   Memory and Music.org


According to the Alzheimer’s Foundation of America, when used in the right way, music can allow the patient to “shift mood, manage stress-induced agitation, stimulate positive interactions, facilitate cognitive function, and coordinate motor movements.  Music has power—especially for individuals with Alzheimer’s disease and related dementias. And it can spark compelling outcomes even in the very late stages of the disease.

Many Alzheimer's patients can remember and sing songs even in advanced stages, long after they've stopped recognizing names and faces. Dementia care homes often use music as recreation, since it brings patients pleasure. But beyond the entertainment value, there's growing evidence that listening to music can also help stimulate seemingly lost memories and even help maintain some cognitive functioning.  Alzheimer's Association

This wasn't the direction that I really wanted to go with this post, but I'm hoping that somehow, this might help someone else, whom is walking through Alzheimer's with a family member.

Very well said. I love how you open you heart to everyone. You are special.