It's a funny thing - the memory that is.  The deeper I go back, then stumble upon some pictures - the more clear some things become.  As you know, I've been participating in Mommy's Piggy Tales by writing about my growing up years for my children (as well as for me).  Not all memories are joyous, not all are painful, most we learn from, some are to be enjoyed. 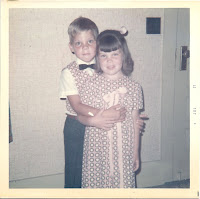 Some things that I've dug up since my last Piggy Tale:

I must have started taking piano lessons when I was in Kindergarten because here is a picture of my brother and I in outfits  Mom made for a recital.  I think this is one of my favorite pictures - I loved that dress!  I remember not liking Mrs. Todd, our piano teacher, who seemed to have bee-hive shaped hair piled on her head. She had a sharp voice and I never seemed to play anything to her liking. She still lives in the same house, and every time we pass it on the way to Mom's, I can't help but shudder. 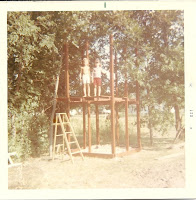 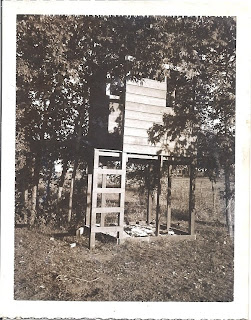 In October of 1971, our parents began working on a playhouse complete with a sandbox below, on the back edge of our 1/4 of the block.  This was the scene of many fierce mud-clot (yes that is what I said) battles because it was built close to the garden. When we set the corner pole, we put our hand prints in the over-flow cement... It was a great place for the kids to get away during holiday gatherings and the adults rarely bothered us. Before the ladder was completed, my mom left the step-ladder up so we could play in it.  It was always so rickety - must be where my fear of ladders started. Anyway, all the cousins were already up there and I was trying to get up, I put my hand up the landing to climb on up, my cousin Ray stepped on my hand, and backward I went.  If you were here, I'd show you my chin where I got stictches from that incident... I think I probably bit the dr. when he tried to numb it. 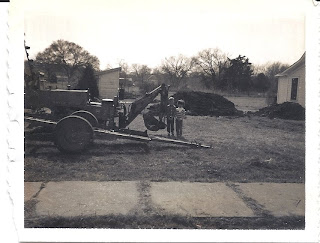 Do you remember, I wrote earlier that we didn't have indoor plumbing and used an outhouse? You will be thrilled to know that we did get a septic tank and finally plumbing!  YES!!!  Here is a picture of Bryan and I standing beside the backhoe.  In the background you can see the outhouse to the left... Lovely little thing was backed by a cedar tree and covered in Honeysuckle vines.  Maybe it was mask the horrible smell.

PETS:  Sometime before we left for Florida, Mom took me to Walmart (which was almost an hour away, and she bought me a parakeet, Pretty Bird, which lived until I went away to college.  We also had a miniature poodle, Minette (yes, like Lynnet).  We must have had a cat, I don't remember it's name, but I remember being quite young, sitting out on the porch with the cats, and eating Purina Cat Chow with them.  I mean, it must have been good or they wouldn't eat it right?  My Mom found out about that and quickly put a stop to it. 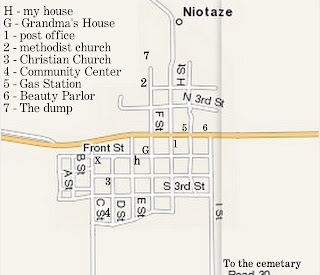 Now before you start to wonder how big this town was, we had a post-office that doubled as the general store, a gas station, two churches (Methodist, which is on the National Historical Registry,  where my mom got married  and the Christian Church) on different sides of the town. Instead of me writing this all out, why don't I just show you a map!   As you can see, Niotaze is not an overly large town, no more than 2 houses per block - about 75 people in all.  It was once a bustling town with a bank (that Jesse James or the Dalton Brothers tried to rob), a general store that my grandpa's family ran), and much more, but the Depression Era took it's toll.  We had a total of 5 stop signs at the time, simply because they you needed them because Hwy. 166 ran through the middle of town.   If you would like to read more I wrote a story, Post-Toasties Encounter, about living in Niotaze (it's in 2 parts).


I actually loved living in this town and sometimes mourn the fact that my kids will never know what it was like to grow up in such a close community. It wasn't until after I left for college that we got street signs and a paved road going from the post office to the west side of town.  All the rest of the streets are still dirt and gravel. There were many fond memories made there, and one of the best things was living across the street from Grandma Wilson, my Mom's mom.

My grandparents had quite a story and sometime I'll have to write their story and post it later.  I do remember them celebrating their 50th wedding Anniversary in 1971 - he was STILL chasing after Grandma and pinching her and her slapping his hand with "Oh Oney!"  It was easy to see they were still in love and I remember thinking "WOW!  When I grow up, I want a marriage like that." You gotta be careful what you wish for!!!

I hope you'll come back and read more Piggy Tales of my childhood growing up. I'm pretty proud of the small town Kansas life that I lived and thankful for the lessons I learned living there. Do you have any memories of growing up that you can tell me about?  Have you written any down or told them to your kids?  They may be quite amused at some of them, but they also may be quite interested in know what events shaped the Mom they know today!

Thanks for this next installment. Do you still play piano?

Hi Lynnet! I'm just now catching up on my reading. That play area looks divine (and relatively safe). I'm sort of envious; I'm certain that it is a part of many fun memories. Thanks for sharing.